I’m already so proud of us. We have already accomplished so much this year, I can’t help but already be proud of you for things I know you will accomplish at 27. That’s honestly how confident I am in us. It’s so much bigger than being perfect or having It all figured it, it’s about being true to ourselves and just doing the best we can in this crazy, beautiful, wonderful life we are blessed to have.

Art at 26 showed out honey! I mean, we freaking moved to Chicago, on our own! We started a new job that changed our tax bracket. We’re navigating a new, completely different city on our own. I mean, can you say growth? We started THERAPY! Thank God for Therapy! We had Hoodie Season 2! It’s just so much. Even without a list of technical “accomplishments”, I’m so very proud of all the mental and emotional growth that we’ve done in this INSANE year.

Sorry that you couldn’t be celebrate the 4th annual ART Weekend with your friends in Atlanta due to the Rona (Coronavirus) messing up your plans, but don’t fear, this birthday and this year will be amazing. I’ve been doing a lot of reflection on life and I can fully say that while this year has been no crystal staircase, your life has been very fulfilling and blessed in so many ways. I honestly can say “Job well done, beautiful!”.

I really wish I could put into words the amount of emotional and mental growth that has happened this year. It’s honestly part of the reason I haven’t been putting out as many blogs because so much has happened. So much is still happening and I really don’t have all the words. Everything just feels different. I’m literally sitting and typing in the middle of a pandemic and I’m so calm. I’m happy. We’re happy going into our 27th birthday. We feel so good. It feels like all the mental work we’ve done by establishing boundaries, maintaining peace and overcoming trauma is paying off. The crazy part is that we’re still in the thick of it, but this is a peace that surpasses all understanding. It feels like a miracle honestly. It feels like a blessing. It feels like God.

What’s crazy is that as much as I’d love to be with my friends and eating the best fried shrimp in Middle Georgia, I feel like I’m right where I/we should be. This year I’ve realized that past Alena has gotten us through so much. From past blogs, journal notes and therapy sessions, I’ve found a way to leave myself multiple resources to get through the toughest of times. That’s why I know Art at 27 will be okay.

Art at 27, you have 26 versions of yourself that have consistently found ways to be there for you before they even knew you would be here. I don’t have much advice or predictions for what this year will bring. I just know that you will be okay. You’re a survivor. You’re a thriver. Regardless of what life brings, you’ve done a damn good job with everything you’ve been given. You’ve made lemonade out of lemons. You’ve overcome things others will never know. You’ve had very hard conversations with the people you love. You’ve made some very difficult choices. You haven’t given up. You may have had to re-adjust, but you haven’t given up. I can’t say enough how damn proud I am of you.

Whatever this year brings you personally, never forget your worth and how amazing you are. I’m once again going to say Job well done already because I’m already proud on day 1.

I love you beyond measure. Stay beautiful, stay true and trust your growth.

Yes, this is the energy we are coming in with because it is the truth! I didn’t lie this time. I didn’t lie to myself or anyone else. I kept a promise and it feels really good to say that I actually did it! It feels even better when it feels like I’ve lied to myself for such a long time. Let me explain…

Ever since I graduated from college, I’ve had a plan. I was going to work for two years then go to graduate school, specifically at the University of Pennsylvania. It had been my dream school in undergrad, but afraid to transfer, I decided to defer the dream instead and attend for graduate school. I was going to go to an amazingly elite graduate program, for FREE. That was it. That was the entire plan. After that? Well, of course, get a good-paying job. Doing what exactly? Didn’t matter. I just needed to get into grad school and say it was all paid for.

So, what did I do to make this happen? Well, I took the GMAT twice and failed miserably twice. I then postponed taking the third test I bought THREE times before I finally got a “refund” after I realized it wasn’t going to happen.

Me to all my wasted money

Let me tell you, that was an anxiety-induced time in my life. I was telling all my friends how I was “studying” so hard for the GMAT to get into grad school, while privately having this internal battle inside that made me keep on saying myself “why?”. Why did I want to go to grad school? Why couldn’t I shut up about it? Why couldn’t I stop lying about really studying? Why couldn’t I focus?

With so many unanswered whys, came even more lies. So, why the hell was I lying so much about grad school? Well, honestly that shit sounded so good. It gave me the next step. It gave me a purpose, a pathway. It also gave me a great acting role. Acting you say? So, who was the audience? The audience was truly me. Every time I could convince someone to believe in my “dream”, I was one step closer to believing it myself. It was a great show, but afterwards, there wouldn’t be an applause because when the curtains closed, I had to face myself and the truth always comes out. I didn’t want grad school. I just liked the fake audience applause it generated. I didn’t want to really lie. I just appreciated the fact that people believed in me. So, yes, I did lie, but this time I didn’t, and it feels so good.

On July 17, 2018, walking down W Montrose street in Chicago to go to get breakfast at a bagel shop, I stopped to take a selfie to commemorate a promise I knew I would keep. That day I decided I was going to move to Chicago. It felt right. It felt like home. It felt like the truth. I didn’t know exactly when I would get there, but I knew that it would be. In some ways, I don’t know how it all happened, but I can say I didn’t lie. Two weeks short of a year from that day, I’m sitting in my bed, a street over from W Montrose, in Chicago with all my belongings, gladly able to say that I didn’t lie this time and I kept my promise. Oh, what a feeling this is. 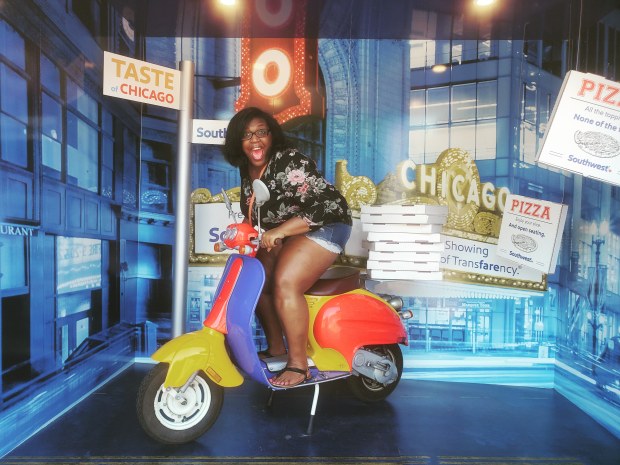 Hello, I'm Alena! I am a 27-year-old navigating through life always looking for the silver lining. On any given day you can find me binge-watching The Office, painting, getting on a flight, dancing alone in the kitchen, trying new restaurants or taking a nap. ART Undone is all about finding beauty in this journey we call life. I hope this blog motivates you, makes you laugh, gives you life or even helps you procrastinate every once in a while. Thanks for taking the time to glance into my studio as I paint my masterpiece!